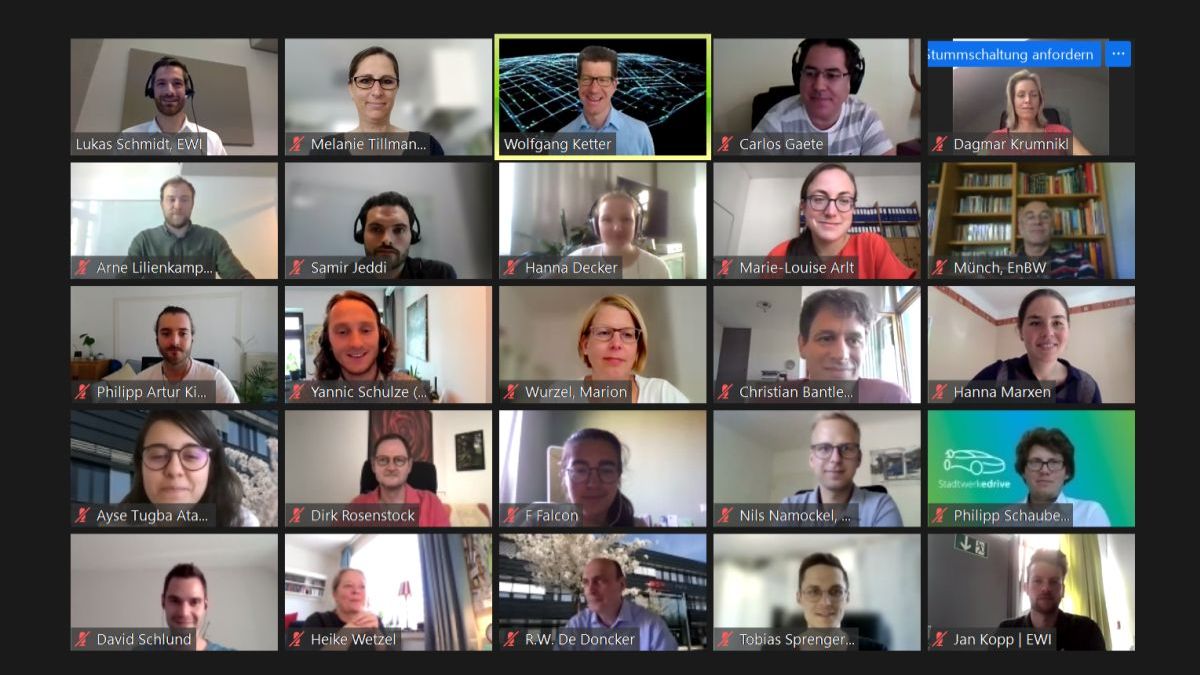 Charging electric cars poses challenges for power grids. But research and practice can alleviate the so-called charging trilemma. An article by Arne Lilienkamp and Wolfgang Ketter.

The number of electric vehicles will have to increase significantly over the next decade to meet climate protection targets – and it probably will: the German government and the “National Platform for the Future of Mobility” expect 7 to 14 million electric vehicles on German roads by 2030. The challenges arising from this and possible solutions were the subjects of the EWI Insights event, moderated by EWI manager Dr. Lukas Schmidt.

To mitigate the charging trilemma, three dimensions need to be coordinated: Stakeholders, time, and space

Stakeholders can be divided into the following groups:

Infrastructure operators primarily want to refinance investments and avoid peak loads. Mobility-first stakeholders, on the other hand, primarily want end users to be as mobile as they want to be. This leads to a conflict of interests between the two groups.

This is currently evident, for example, in the debate surrounding the issue of peak curtailment and the amendment of §14a EnWG. This section of the Energy Industry Act (EnWG) regulates the use of controllable consumption devices in low-voltage systems. An initial draft of the amendment stated that distribution system operators should be given the option of restricting the charging of electric vehicles in a maximum of two hours per day. However, the plan met with criticism, particularly from vehicle manufacturers, and was initially rejected.

What ducks have to do with electric cars

The temporal and spatial components of the coordination task arise from the (limited) availability of electricity from renewables; thus, they primarily affect energy suppliers. Their challenge is illustrated by the concept of the so-called “Duck Curve”. The “Duck Curve” maps the necessary generation output of conventional power plants within a day and reflects the divergence between peak loads and the feed-in of electricity from renewables. It is named after its distinctive shape, which is reminiscent of a duck.

The problem: If electric vehicles are charged exclusively at home, for example, after returning from work, the demand for electricity increases when the feed-in from renewables, primarily solar, is already declining. This necessitates rapid additional conventional generation. This works against the goal of charging electric vehicles primarily with electricity from renewables.

Therefore, the feed-in of electricity from renewables and the charging of electric vehicles must be brought together in terms of time. For this purpose, either the generation can be shifted by using storage facilities, or charging is primarily done when the renewables are fed into the grid. While the former requires investment in storage and mainly involves a temporal shift, the latter has a spatial dimension in addition to the temporal aspect. For example, electric vehicles of commuters are located at work or other prominent points (“points of interest”, e.g., supermarkets) during the day.

Charging operates according to different rules

However, the interests of the various stakeholders are only at first glance conflicting. The “smart charging” value chain links up with the energy industry value chain and builds a bridge to user preferences. In this way, it makes it possible to align interests with one another. Here, the management of charging behavior (“smart charging”) plays a vital role.

“The integration of the electric vehicle fleet into the overall system is a coordination task. To master this, an exchange between science and practice is important,” says Prof. Wolfgang Ketter, Director at the EWI and Chair of “Information Systems for Sustainable Society” at the University of Cologne. This could help identify and develop new business areas along the smart charging value chain. They could help defuse the charging trilemma and reconcile the different interests of the stakeholders involved.