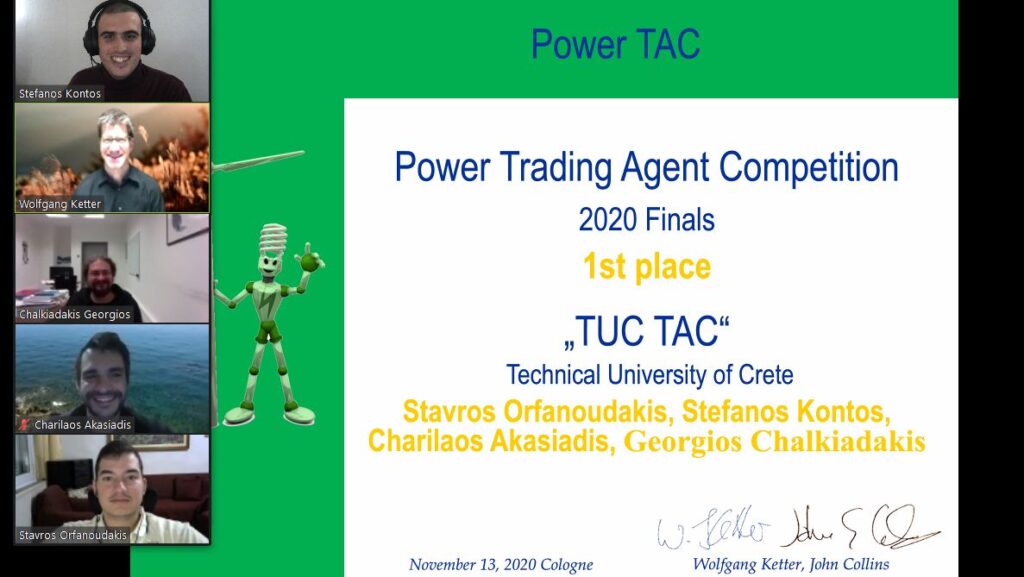 Seven research groups presented their contributions to the Power Trading Agent Competition (Power TAC) at the (virtual) PASS workshop. The international competition pitted participants from more than 6 different countries against each other. The group “TUC TAC” of researchers Stavros Orfanoudakis, Stefanos Kontos, Georgios Chalkiadakis and Charilaos Akasiadis from the Technical University of Crete were awarded as winners.

The “Power TAC” competition takes place on an open-source platform that simulates highly complex current and future electricity markets. The competition pits self-learning trading agents (“brokers”) against each other. It was built by EWI Director Wolfgang Ketter and John Collins (University of Minnesota). The goal was to use digital information systems and artificial intelligence to better integrate renewable energy into existing electricity markets.

That’s because today’s electricity markets were created at a time when electricity was generated almost exclusively from fossil fuels. Back then, it was relatively easy to balance electricity supply and demand and predict market behavior. However, with increasing production from renewables, as well as more “prosumers” who both consume and produce electricity, this task is becoming increasingly complex. An international “Power TAC” was first held in 2012, and has been held every year since.

“We had excellent contributions again this year from groups around the world,” Ketter said. “I’m pleased that the community is so actively participating in our competition, further advancing research on self-learning systems and sustainability.”

Faculty members present their own contributions

Frederik Milkau, research associate at the chair “Information Systems for Sustainable Society” at the University of Cologne, also presented his work on the further development of the platform itself. The main focus was on the so-called “Experiment Scheduler”. The scheduler makes it easier for researchers to use the Power TAC platform to simulate the behavior of intelligent market agents in a competitive environment. In particular, it can be used to study different policy instruments in terms of their effectiveness in the context of smart power markets.

Nastaran Naseri and Saber Talari, also research associates at the chair of EWI Director Wolfgang Ketter, presented their broker, which uses smart market segmentation to offer its tariffs in particular to those customers who contribute little to peak demand. This reduces so-called capacity payments in the simulation. The design of the tariff itself relies on reinforcement learning, which enables adaptive pricing.

“Reinforcement learning” is a subfield of machine learning that involves software agents autonomously adapting their action strategies based on incoming information and thus making improved decisions. It is intended to imitate the learning strategies of biological organisms and is considered a promising intermediate step on the way to general artificial intelligence.

Next year, on the occasion of its 10th anniversary, another Power TAC competition is planned.