23 May 2019 | On behalf of INEOS in Cologne, a large chemical producer and a significant player in the gas market, EWI analysed the potential development of gas demand – in case the current level of ambition concerning the expansion of renewable energies and the reduction of energy consumption cannot be increased. 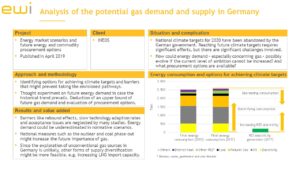 In the next step, a meta-study of normative scenarios reaching national climate targets is performed. Normative scenarios sketch how a pathway towards a target might look like, assuming all necessary steps could be accomplished. Unfortunately, barriers like rebound effects, slow technology adaption rates and acceptance issues are often neglected. Energy demand could thus be underestimated in normative scenarios. Therefore, a thought experiment on future energy demand is conducted. Main assumptions are a continuation of the historical trend of reducing energy consumption, a limited expansion of renewable energies as well as a coal phase-out in Germany. This would result in a rising demand for natural gas and an increasing import share, since national exploration is declining. Also, the national climate target for 2030 will most likely be missed.