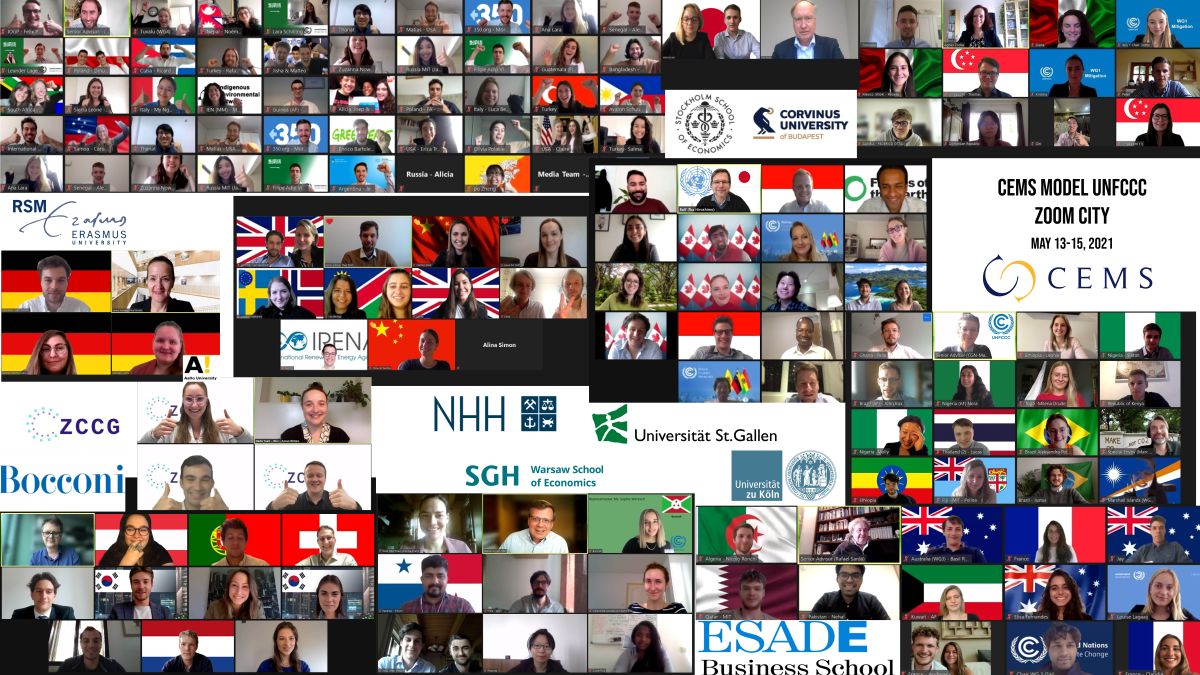 At the 13th edition of the CEMS Model UNFCCC simulation game, students simulate international climate politics as they would at the United Nations.

Climate politics from Tuvalu to China, from Australia to Fiji: students from numerous countries simulated United Nations negotiations on global climate protection at the CEMS Model UNFCCC and discussed them up to the last minute – until they were able to pass the “Agreement Zoom City II”.

For the second time, the simulation could only take place digitally in “Zoom City”. This year, more than 150 students from twelve countries took part. During the simulated climate protection negotiations, the students were guided by the Institute of Energy Economics (EWI) at the University of Cologne and the University of Cologne. The Model UNFCCC is hosted by CEMS, a network of business schools around the world.

Experience complexity in a playful way

“The delegates engaged with the challenges of international climate policy at Model COP26 and together reached an agreement to actively curb climate change,” said Maria Kotzias of the Chair of Energy Economics at the University of Cologne. They ultimately agreed to limit the global temperature rise to 1.6° C – and to put enormous financial resources into achieving this. “In the end, it was clear to everyone involved that the only way to a better future is to work together. Everyone also showed a lot of stamina in the digital space.”

Previously, the chair, together with Dr. Stephanie Fiedler, among others, who is Junior Professor of Energy Meteorology at the University of Cologne as well as Chief Energy Meteorologist at the EWI at the same time, had prepared the students of the University of Cologne for the final simulation in a course. The course focused on the economics of climate change and how the countries participating in the simulation can adapt to or mitigate climate change.

The aim of the simulation is to make it possible to experience the complexity of climate protection negotiations in all their facets in a playful way. It gives participants the opportunity to put themselves in the shoes of the “real” delegates. In addition, the method requires participants to represent positions that may not correspond to their own opinion, thus leaving their own comfort zone and rising above themselves.