Ceremony of the Johannes Rau Research Association: Admission of the Institute of Energy Economics 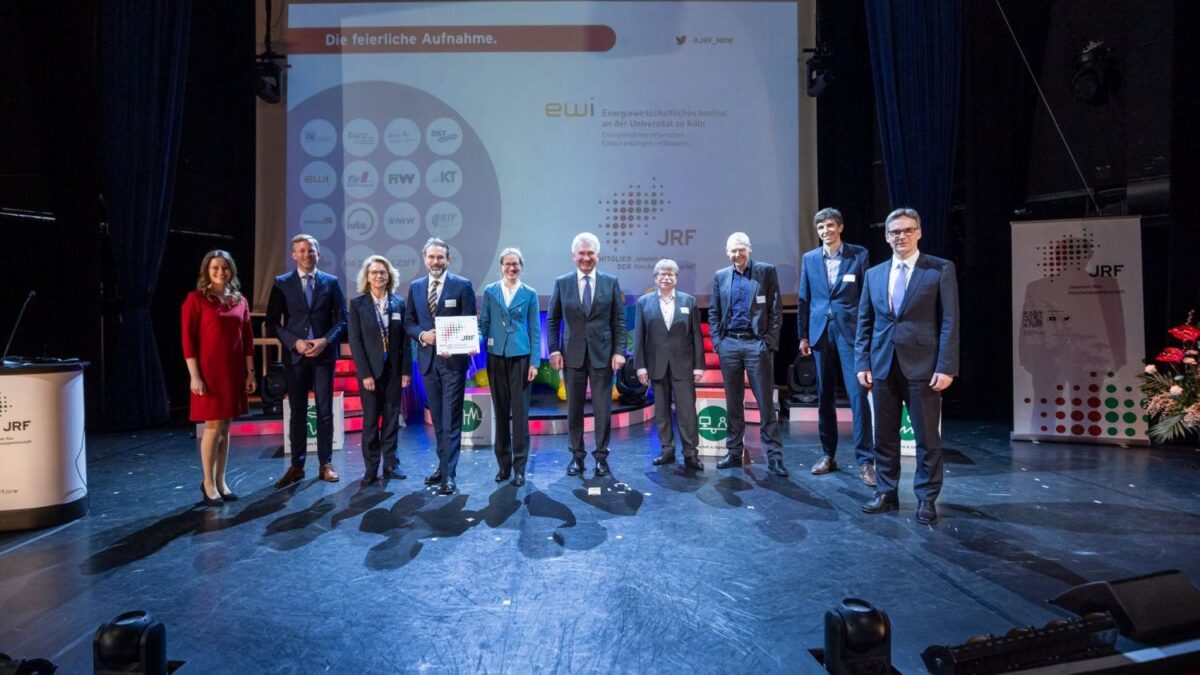 In a ceremony in Düsseldorf, the EWI was admitted to the Johannes Rau Research Association (JRF).

Prof. Andreas Pinkwart, NRW Minister of Economic Affairs, Dr. Dirk Günnewig, State Secretary at the NRW Ministry of Science and Prof. Bettina Rockenbach, Prorector for Research and Innovation at the University of Cologne, delivered welcoming addresses at the ceremony:

Minister Prof. Pinkwart: “The EWI has established an excellent reputation. One example is last year’s DENA study, which made a significant contribution to the future of energy supply in Germany and beyond. It is important for political argumentation to be able to refer to such reliable and nationally and internationally respected studies. I am very pleased that the EWI has joined the JRF and will be strengthened within the research community. I wish the EWI and the JRF every success in their collaboration.”

State Secretary Dr. Dirk Günnewig: “With the admission of the EWI, the JRF receives a perfectly fitting reinforcement. Together, research will now be conducted on important future topics such as the energy transition and practical solutions will be developed on how to successfully shape the rapid change. The EWI can be satisfied and proud to be accepted into a powerful research community. It is a distinction for what has already been achieved, but also to be understood as a mission to do justice to this community. In the eight years since the Johannes Rau Research Association was founded, it has established itself in the scientific community of North Rhine-Westphalia, but also beyond.”

According to Prorector Prof. Rockenbach, “The EWI has since focused on both technological change in energy policy and the geopolitical and societal framework. This is particularly topical and important against the backdrop of the Russia-Ukraine conflict. The admission of the EWI as an affiliated institute of the University of Cologne to the JRF is of high strategic importance and marks a high point in the structural development of the EWI. I would like to warmly congratulate all those involved on this success.”

The act of admission took place through the symbolic presentation of a membership plaque by the Executive Board to the EWI’s institute management.

Prof. Bathen, Chairman of the Board of the JRF: “The JRF is delighted to welcome a new member for the first time since its foundation in 2014. The EWI has proven in the admission and evaluation process that it is a top-class, renowned, scientifically and economically strong institute with a young, motivated team and a first-class institute management. We are extremely pleased to welcome EWI into the JRF family. We are convinced that EWI’s content focus will perfectly fit our four guiding themes, fruitful collaborations with other JRF institutes will be established, and our community as a whole will be enriched.”

“We are delighted to be accepted into the JRF,” said EWI Director Prof. Marc Oliver Bettzüge. “Membership in the research community connects us with complementary and capable partners, and EWI can make relevant contributions to the JRF’s priority areas.” Moreover, he added, membership in the JRF offers interesting and complementary perspectives for the training of young scientists at the EWI.

Following the ceremonial part, a tandem lecture by the EWI highlighted the energy situation in Germany in the course of the energy transition. In a subsequent panel discussion, scientists from the JRF institutes EWI, ZBT and Wuppertal Institute and the Düsseldorf Institute for Energy Law exchanged views on the perspectives of energy research in NRW and the resulting challenges and potentials of interdisciplinary research.

The inclusion was preceded by a year-long process. In mid-December, an extraordinary general meeting of the JRF, chaired by the Ministry of Culture and Science of North Rhine-Westphalia, voted unanimously in favor of the Cologne-based institute’s admission. The EWI is institutionally funded by the North Rhine-Westphalian Ministry of Economics and is an affiliated institute of the University of Cologne.

About the Johannes Rau Research Association

The Johannes Rau Research Association is the research association of the state of North Rhine-Westphalia. It currently has 16 scientific institutes with more than 1,500 employees in NRW and an annual turnover of over 110 million euros. The non-profit association was founded in 2014 as an umbrella organization for state-funded, legally independent, non-university and non-profit research institutes. Under the mission statement “Research ‘Made in NRW’ for Society, Economy, Politics,” the JRF institutes work together across disciplines, conduct joint public relations work, promote young scientists and are evaluated by external experts. In addition to the scientific members, the state of NRW is a founding member, represented by the Ministry of Culture and Science.