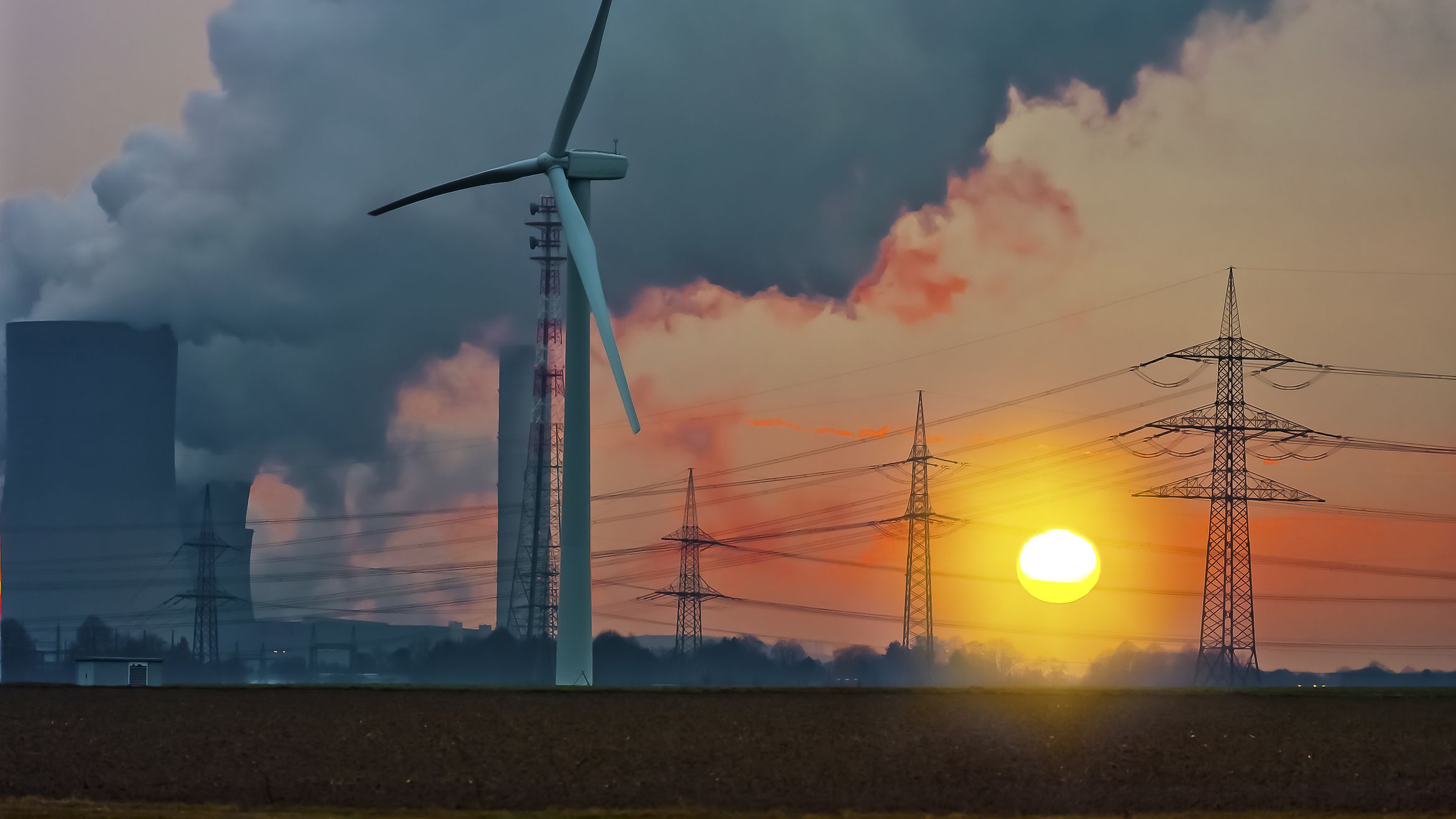 Renewable energies should cover 65 percent of electricity consumption by 2030. This is the plan of the German government. However, an EWI team has calculated that the share of renewables could only be around 46 percent.

According to the German government’s climate protection programme 2030, renewable energies are to cover 65 percent of national gross electricity consumption in 2030. An EWI analysis shows that Germany could miss the 65 percent target significantly.

A team of the institute has calculated that gross electricity consumption could rise to 748 terawatt hours (TWh) by 2030. At the same time, electricity generation from renewables would rise to 345 TWh. The share of renewable energies would thus be only 46 percent, instead of the targeted 65 percent.

Whether Germany achieves the 65 percent target for 2030, depends above all on two key variables. First, the future development of electricity demand plays a central role. Secondly, the expansion of renewable energies, in particular wind energy and photovoltaics, will be crucial.

According to BT-Drucksache 19/13900, the Federal Government assumes a gross electricity consumption of 595 TWh “slightly below today’s level” by 2030. In contrast, EWI arrives at a gross electricity demand of 748 TWh, looking at the dena-Leitstudie and the targets set out in the Climate Protection Programme 2030. A comparison of other scenarios, such as those of the dena-Leitstudie, the Federation of German Industries (BDI), the Federal Network Agency (Bundesnetzagentur) or the German Renewable Energy Federation (bee), also shows a heterogeneous picture for electricity demand. However, the majority of the studies considered assume that consumption will increase.

“The central drivers for the increase are the growing number of electric vehicles and heat pumps”, says Max Gierkink, manager at EWI. “The production of green hydrogen using the electrolysis process is also gaining in importance.”

The second influencing factor is the expansion of renewable energies. On the basis of the tenders and special invitations to tender planned in the Renewable Energy Sources Act (EEG), EWI calculates the installed capacity in 2030, taking into account that the first plants will fall out of EEG support from 2020. The EWI calculation results in a generation of 345 TWh in 2030, an increase of 119 TWh compared to 2018. The Federal Government assumes 377 TWh in the Climate Protection Programme 2030. 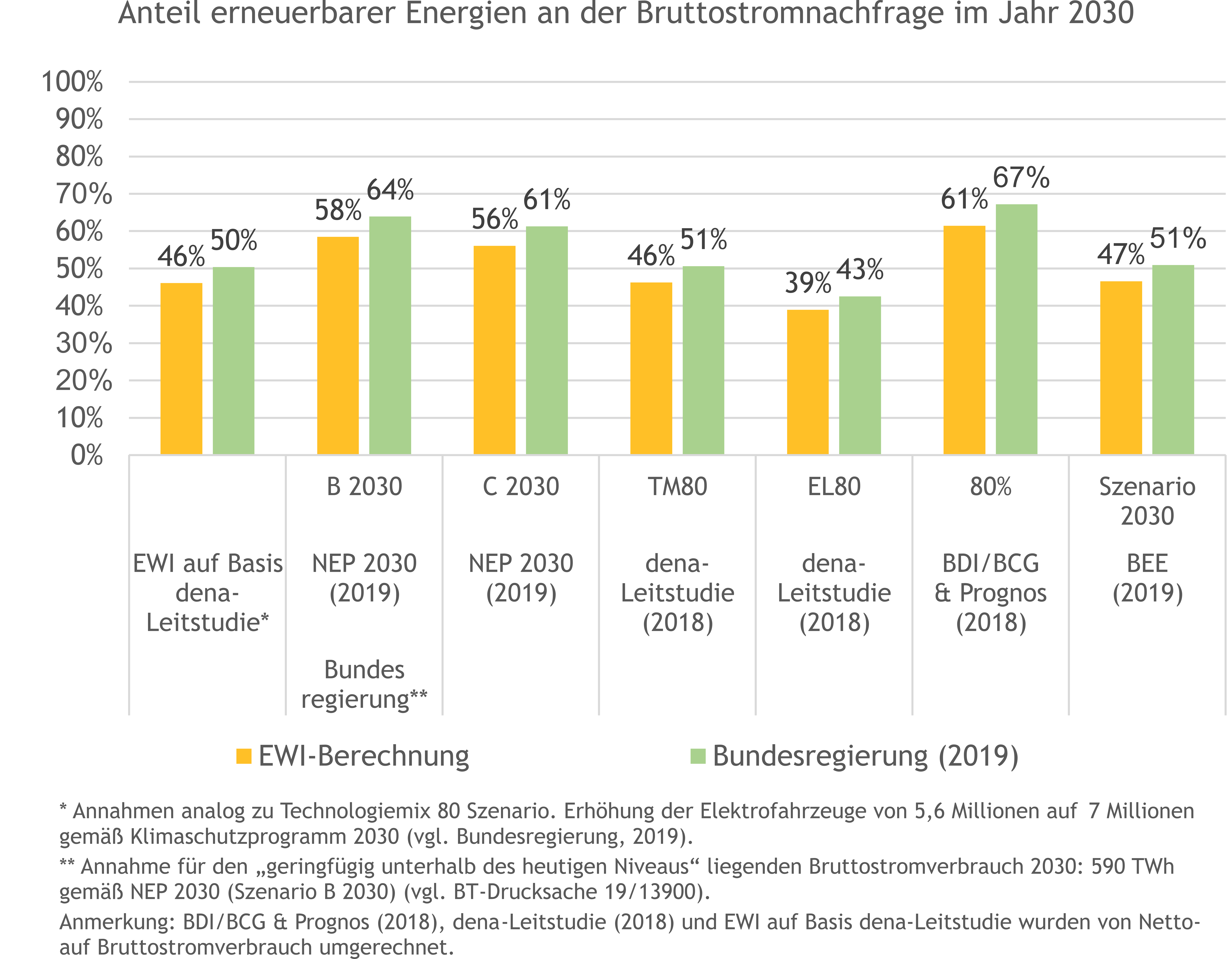 “The difference is due to the higher installed capacity in the photovoltaic sector. The German government assumes 98 GW, while the EWI calculations result in 66 GW,” explains Tobias Sprenger, Research Analyst at the EWI. In the case of wind onshore, the figures of the EWI and the Federal Government are identical. Both assume approx. 68 GW installed capacity in 2030, which corresponds to an increase of 16 GW compared to 2018. A further expansion is not assumed due to acceptance problems.

EWI sees renewables’ share of electricity consumption at only 46 percent

The analyses result in a range of 39% to 67% for the share of renewable energies. With a gross electricity demand of 748 TWh and a generation of 345 TWh, according to the EWI analysis, a share of 46% is achieved. “The calculations for the expansion of renewable energies and the development of electricity demand indicate that Germany will miss the 65 percent target in 2030”, says Max Gierkink.