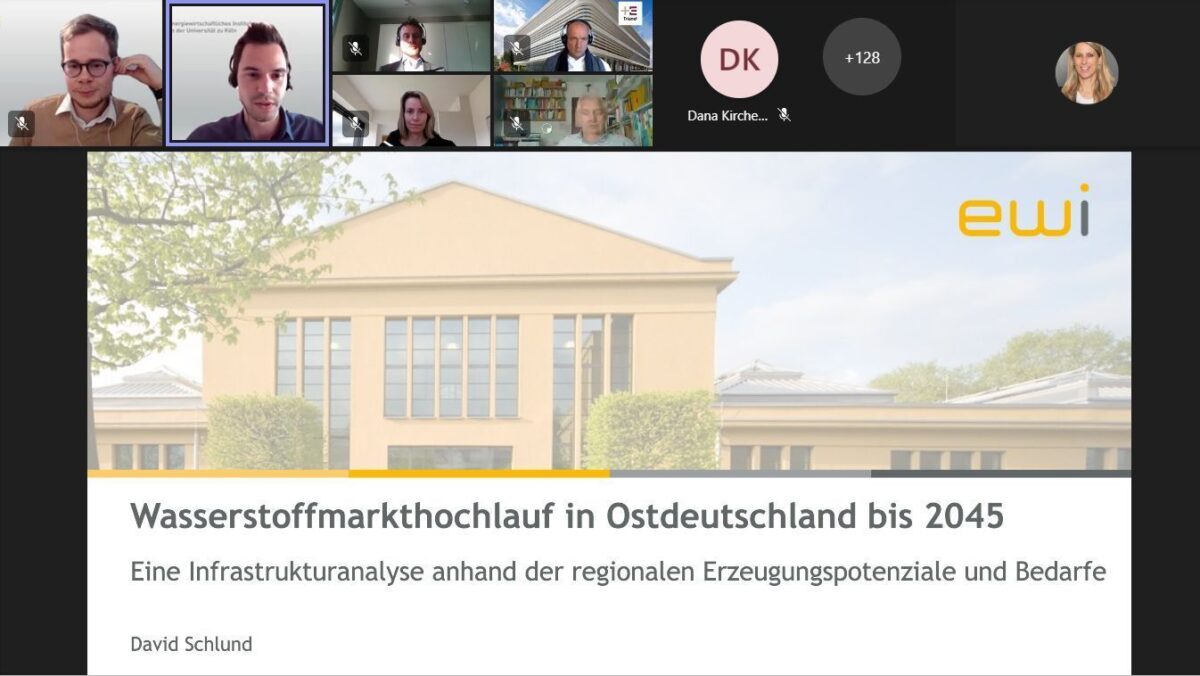 Where will the market ramp-up of hydrogen take us, and how will we get there? Research findings on this have been presented by EWI researchers Philipp Theile and David Schlund.

“In the context of the consequences of the war in Ukraine, the topic of ‘hydrogen market ramp-up’ has become even more important,” said Dr. Eren Çam, manager and head of energy commodities at EWI, at the beginning of the digital event with more than 150 participants.

The first part of the event focused on the impact of possible green electricity criteria on electrolysers. The European Commission is working on a definition of what exactly should be considered “green” hydrogen. One of the criteria is expected to be that the hydrogen is produced using (additional) green electricity. In addition, the electricity production from renewable energy sources should roughly coincide in time and balance with the electricity consumption of the electrolyzer (“simultaneity rule”).

“If this rule is interpreted rather strictly by the EU, indirect emissions in the electricity sector will indeed decrease,” said Philipp Theile, Senior Research Associate at EWI. “In return, electrolysers could be much less profitable and also produce less. Policymakers face a dilemma.” The findings presented are from the policy brief “The Concurrency Rule for Renewable Electricity and Hydrogen Production – An Examination of the Economics of Electrolysers.”

In the second part of the event, David Schlund presented research results on the development of a hydrogen economy in eastern Germany. In the study “Hydrogen market ramp-up in Eastern Germany by 2045 – An infrastructure analysis based on regional production potentials and needs”, an EWI team had analyzed two scenarios: The “Diversification” scenario assumes a greater role for hydrogen in the substitution of fossil fuels, while the “Electrification” scenario assumes a predominant electrification of energy consumption. The resulting hydrogen balances, together with analyses of import and export needs in eastern Germany, provide a possible picture of future transportation needs.

“Depending on the development of hydrogen demand in the individual sectors, there could be an annual hydrogen deficit of up to 54 TWh in eastern Germany in 2045,” said Senior Research Associate Schlund. In both scenarios, he said, hydrogen production is concentrated in coastal regions, while demand is primarily in industrial centers and metropolitan areas. However, to meet the increasing transit demand, numerous pipelines would have to be converted from natural gas to hydrogen by 2045, and new pipelines would have to be built.